The study we performed for the Geneva Geothermal project aims to locate and identify the geometries of the tectonic structures in the Geneva Basin and in the adjacent Jura fold-and-thrust belt. What are the orientations and the lateral extensions of the main folds and faults? What is the vertical distribution of these structures (Mesozoic-Cenozoic cover and Paleozoic basement) ?

The study area is situated at the detached Northern Alpine Foreland which was transported towards the NW during the Alpine compression between Miocene and Pliocene. It is surrounded by the Vuache Mountain to the SW and by the Mount Saleve and the subalpine Molasse to the SE.

We are using subsurface and surface data to define a new surface structural map of the Basin and the surrounding areas.

To investigate in more details the structural configuration of the Geneva Molasse Basin, we have interpreted 2D seismic data (representing more than 830km of lines in the Geneva Canton and the neighbouring France). This gives us insight into the local structures to generate regional cross-sections along seismic lines from the Jura (NW) to the subalpine Molasse (SE). An enhanced time to depth conversion of these sections removed artefacts such as pull up and push down effects. The most interesting sections were implemented in a modelling software to study the actual stress field of the area. A parametric study is also applied to understand the impact of different frictions of the decollement on the inherited fault, on the future localization of deformation and on the associated stress field.

A simplified structural geometry will subsequently allow us to constrain the mechanical context of the region and will also help to generate hypotheses regarding structures that are poorly imaged (geometry of the footwall of the Mount Salève, or the nature of the faults in the Geneva Basin).

The main benefit of the study is a resulting structural map which help us understand the kinematic development and will be used as input for oncoming hydrogeological models conducted by SIG (Services Industriels de Genève). It will ultimately improve the planning of future geothermal wells to obtain satisfactory water flow rates (higher in naturally fractured zones of faults). 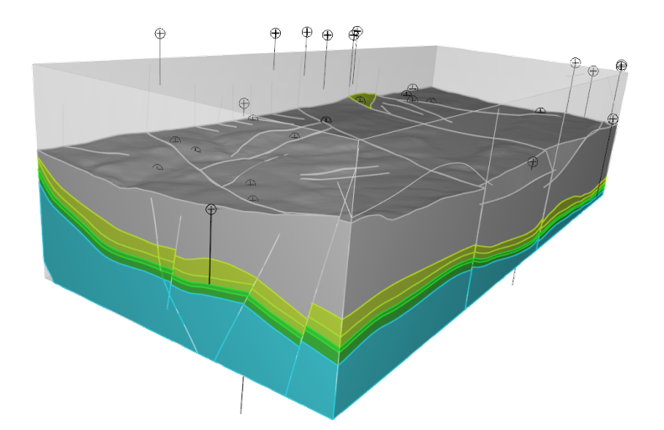 In the global search for renewable and low-emission energies, there is a strong emphasis on geothermal potential and the accurate characterization of known resources.

This study summarises the results of our first-order conceptual feasibility study. We investigated the concept of injecting and circulating CO2 for geothermal energy production from potential CO2 storage formations in Switzerland.